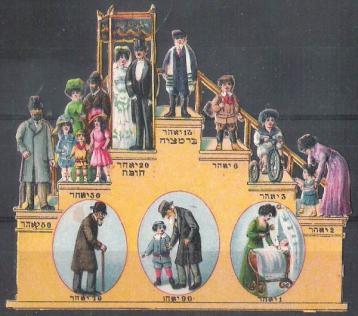 Where's the Beef? Tonight, we celebrate the holiday of Shavuot, which, in Biblical and Temple times marked the opening of the harvest season and the bringing of the first fruits to Jerusalem, and which today is more commonly celebrated as the holiday of the giving of the Torah on Mt. Sinai, which took place 50 days after the Exodus from Egypt. Here in Israel, Shavuot has become a gigantic dairy food festival, with ads and commercials running for the past few weeks for fancy cheeses, cheesecakes, recipe books, etc. The custom to eat dairy on this holiday, as opposed to the law to eat meat on all the other holidays (that's right, it is, in fact, a law, not a custom), is steeped in mystery and conjecture; no one really knows why we do it.In addition to this culinary conundrum, there are a few other obvious questions which need to be asked about Shavuot. Why is it so short? Unlike the two other pilgrimage festivals, Passover and Sukkot, which are seven days long, Shavuot is just one day (traditionally celebrated as two in the Diaspora for technical, calendar-related reasons). Why so short? We couldn't take a week to celebrate the giving of the Torah, the most important event in Jewish history? And, as long as we are asking, why is there no ritual connected to it? On Passover there is the matzoh, the seder, the refraining from bread. On Sukkot, the sitting in the Sukkkah (booth) and the taking of the 4 species, lulav, etrog, hadass and arava. Shavuot has no ritual at all connected to the receiving of the Torah (the custom to stay up all night studying Torah is very late, and appears nowhere in the Rabbinic sources). Why does Shavuot get such a rotten deal? Why is it so empty of ritual? Why can't we even get a good, heavy, meat meal out of it; chicken soup, some chopped liver, a brisket, or a piece of roast chicken? Why is this one-day, ritually-challenged holiday also insulted by being celebrated with cottage cheese and sour cream?As you know, the people of Israel received the Torah in the desert. The exact location of Mt. Sinai is unclear, but the Torah reminds us again and again - as it did at the opening of last week's portion Ba'midbar ("in the desert", which is the classical Hebrew name for the fourth of the five books of Moses, rather than the English "Numbers") - that it was given in the desert. The Rabbis note this, and have a whole series of drashot which explain that the desert is the appropriate place in which to hear the word of God, and receiving it there teaches us what we need to know and do in order to continue to receive, study and understand the Torah:"Why was the Torah given in the desert? To teach you that only if one makes oneself hefker (ownerless, unfettered, free), as the desert is, will one merit the words of the Torah.""Just as the desert has no end, so, too, the words of the Torah have no end...as its reward has no end.""Had the Torah been given in the Land of Israel, the Jewish people would have said to the nations of the world 'you have no share in it' so, rather, it was given in the desert, an ownerless place, so whoever wants it can come and get it." These beautiful Midrsahim point to the desert as the right place for the Torah, and a model for the ongoing receiving of the Torah, precisely because of its lack of specific features, it's ownerlessness, openness, and absence of boundaries. Only someone who cultivates these characteristics can hope to receive, and to truly study and understand the Torah. Only someone who is unencumbered by preconceptions and prejudices, and is open to the infinite, universal possibilities and implications of the Torah, can ever really hope to understand it.The holiday of Shavuot reflects the need for this open, unfettered receptiveness. Just one day, concentrated, focused, emptied of all other concerns, unencumbered by ritual, by process, even by cold cuts, without any identity or character other than being set aside as the day to receive the Torah. This is the appropriate way to accept the Torah, to study and teach it. Shavuot's shortcomings are, in fact, its strengths, its lesson for all of us who would like to continue to receive and understand the word of God. I wish you all an open, free, enjoyable and meaningful Shavuot, and encourage you to find a place in your area to study Torah tonight. Chag sameach,Shimon

When a girl reaches the age of 12, and a boy the age of 13, they are legally considered to be adults by traditional Jewish law. They are obliged to keep all of the commandments and rituals of the tradition, and are adults in terms of all legal transactions, contracts, or agreements. It is not clear if, in pre-modern times, this milestone was celebrated with any specific ritual. In modern times, it has become the custom to publically celebrate this rite of passage. This began with boys, who would typically be called up to the Torah in synagogue on the Shabbat of their 13th birthday and read a portion from it. There was also a custom for the Bar-Mitzvah boy to say a Dvar Torah - words of Torah - on this occassion, and a party was held, usually in the synagogue.

Girls came late to this celebration; it was not until the mid-twentieth century when the Bat-Mitzvah, or daughter of the commandment, became a widely-held celebration. In the Ortrhodox community, a party is thrown, and perhaps a dvar Torah would be said by the Bat Mitzvah girl. In liberal Orthodox and non-Orthodox communities, girls are called to the Torah and read from it.   There is also a recent tradition for the boy or girl to embark on some social action project to mark this occasion with chessed (kindness) and tzdaka (charity).

In many Jewish communities, the Bar and Bat Mitzvah are celebrated with little religious content, as a kind of birthday party for children as they reach adolesence. At times, these events seem to miss the point of the occasion, which is meant to be an understanding and recognition on the part of the young man or woman that they are now responsible members of the Jewish community, rather than an opportunity for opulent and often tasteless exhibitions of wealth and status.