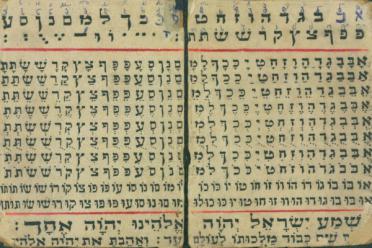 The innocent victims of the Trump presidency are many, ranging from parents and children who have viciously and illegally been torn apart and minorities – including the Jews – who are more marginalized and less safe than before, to the very notions of honesty, decency, and civility. I’d like to focus on one particular victim – language - and its sidekick, logical thought.

We’ve all seen, again and again, Trump or one of his surrogates argue on TV, on line, in social media, for one or another of his policies or statements. Invariably, one’s head begins to spin. Words come out of these people’s mouths, they grin, or glower, raise or lower their voices, they seem to listen to the questions they are being asked, but what comes out is nonsense. A funny kind of nonsense. It is not precisely the mad, disjointed ravings of a lunatic – although we get some of that as well. More often, there are half-truths, attempts at misdirection and obfuscation, and tons of illogical argument. Topics are switched, as if we were playing some ridiculous shell game. Some word in the question is seized upon and turned into a trigger for an entirely different conversation. Real questions about real events are answered with empty, often meaningless slogans, often going back to talk about Obama and Clinton when the topic is Trump and the terrible damage he is doing. It’s like being on a broken merry-go-round. Or in a well-dressed, well coiffed, and very well-paid lunatic asylum.

In this week’s parsha, Korach rebels against Moshe and Aharon. The weapons he uses, the Rabbis tell us, are words and reason. He asks a few halachic questions: does a house full of Torah scrolls need a mezuzah on the door? Does a tallit woven completely of purple thread need a purple thread attached to its corner? Moshe answers yes, in both cases – the house with the Torahs needs a mezuzah, and the tallit of t’chelet (purple wool) still needs a purple fringe on its corners, and Korach scoffs at the supposed illogic of the answers.

I will not go into the Halachic issues here, why Korach’s questions are not serious, and Moshe’s answers obviously right. Suffice it to say that Korach’s questions miss the point, willfully. They superficially sound real, and the answers do not sound like they are necessarily correct, but the fact is that Korach is pretending to ask a halachic question, pretending to really think, and talk, about halacha. He is actually obfuscating, confusing, and muddying the waters, with ideas which seem, superficially, real, but which, upon investigation, are phony, not connected to the way halachic thinking works at all. Korach is using a simulacrum of speech, and thought, to start a fight, to challenge Moshe.

The reason he does this is made clear in the first words of the parsha: ויקח קרח  -  and Korach took. There is no object following these words in the verse. The Torah does not tell us what he took. Rather, the Torah is explaining Korach’s mind set, and motivation: he is taking. He wants to take. His pseudo questions about halacha are only tools he would like to use to take things away from Moshe and Aharon – their leadership positions, their roles in the nation’s hierarchy. This motivation leads him to corrupt logic, halachic discourse, and speech itself. His questions are not real; they are merely imitations of halachic discourse and argument. He is not seeking answers, or the truth. He wants to use language against itself, to confuse, rather than enlighten, to obfuscate, rather than clarify, to serve his own purposes, rater than those of truth and thought.

It isn’t easy dealing with this kind of false language, and non-thought. One tries to unravel the lunacy, the phoniness, the posturing and demagoguery, and there’s just more around the corner. I wish us all luck in trying to fight the phonies and save language, discourse, and logic from those who would pretend to use them, and actually corrupt them, just in order to take.

Korach is not seeking answers, or the truth. He wants to use language against itself, to confuse, rather than enlightenRabbi Shimon

Korach, a cousin of Moshe and the high priest Aharon, selfishly challenges their leadership, with disastrous consequences for him and his followers; in a display of God's support for His chosen leaders, the earth swallows them up. The nation complains about this punishment, more are punished, this time with a plague, and, in another divine display of support for the high priest Aharon, his staff miraculously flowers. The parsha concludes with laws pertaining to gifts which must be given to the Priests and Levites.