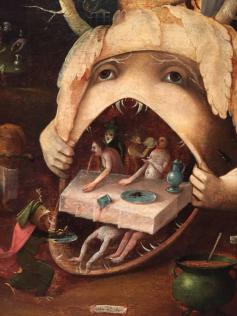 President Trump's juvenile eating habits, the World Economic Forum at Davos, and the upcoming Superbowl and its attendant carnival of carnivorous overindulgence focused my attention on the manna, to which Parshat B’shalach introduces us. This food from heaven was one of the major features of the Israelites’ trip through the desert to the Promised Land, and I'd like to look at one aspect of the miraculous consumption of this miraculous food.

We are told that God commanded the people to collect an omer of manna per person. We are then told that when they actually went out and collected the manna, some (the piggish ones? the nervous ones?) collected more, and some (the lazy ones? those on a diet?) collected less, but when they got home and measured their harvest of manna, lo and behold, they all had collected an identical omer, just enough to feed one person.

Rashi, in his commentary on this, tells us that “this was a big miracle”. Excuse me? After the ten plagues, and the splitting of the sea, and the miraculous appearance of the manna, this, the fact that they all ended up with the same amount, no matter how much they think they collected, is what so impresses Rashi? Why? What’s the big deal? Why does he stress the greatness of this apparently minor miracle?

I have spent a little bit of time, not much, but a bit, with some really wealthy people. Let me tell you, it’s not a blessing. The need to make sure that every aspect of one’s life - the food, the drink, the vacations, the clothes – is good enough, big enough, premium-quality enough for someone with so much wealth, can be all-consuming. The need to continually acquire, to get the latest, the best, the most expensive, the most millionaire-worthy, drives the infantile and extremely wasteful “luxe” market one sees advertised here and there, which many of us, even those who are not “super rich”, or even rich at all, are often guilty of buying into in one way or another: wouldn’t be nice to be able to afford that ridiculously large and extremely vulgar yacht? Or that insanely expensive article of clothing. Or God knows what idiotic tchotchka  they are convincing us is the ultimate in luxury.

The “big miracle” of the manna - the fact that no matter how little or how much you think you have acquired, all you really have is what you really need – is a crucial lesson for us, living, as we do, in a society and a world that is eating, buying, consuming, and polluting itself to death. The conspicuous consumption that the developed (and now some developing) countries are guilty of – the taking of too much – is shown to be ridiculous, when the Torah here reminds us that, in the end, you are left with one portion: you can only eat as much as you can eat. You can only sit in one chair at a time, wear one set of clothes, sleep in one bed. The illusion of taking and having more is just that, an illusion.

There is a halachic concept which might help us understand this: אכילה גסה - gluttony, overeating, eating in some grotesquely exaggerated manner. Although there are a few aspects to this, essentially it simply means eating when one is already full. The halacha tells us – referring to, among other things, eating Matza or the Passover lamb on the night of the seder – that this kind of eating does not “count” as eating. If one is full, and then eats Matza or the Paschal lamb on Pessach, one does not fulfill his or her obligation to eat these foods, because this kind of eating is not really eating. Rather, it is some kind of grotesque consumption; which can not be legally called eating at all.

This is the lesson of the miracle of the manna’s amount. We take and take and take, and yet all we are left with is what we can actually “eat”. All the rest is a grotesque parody of eating, of having; an anti-eating, a not-really-having. Like the extra manna taken by the greedy ones among the Israelites, all that extra stuff we think we have grabbed will just disappear, into an abyss of pointless, damaging, grasping, over-consumption.

In Beshalach, the Israelites are trapped between the oncoming Egyptians, who regret having freed them, and the Reed Sea. The sea splits, the Egyptians are drowned, and the nation begins its journey to the Promised Land of Israel.