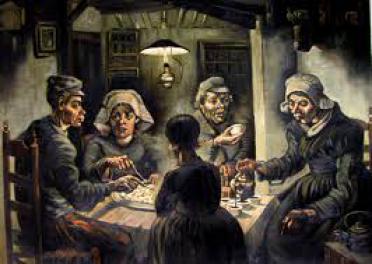 Last week, in parshat Toldot, we learned about the struggle between Yaakov and Esav. This week, in Va’yetze, Yaakov opts out of the conflict and, fearing Esav’s anger, departs for his family’s earlier home, Haran. In Toldot, Yaakov’s dealings with Esav were remarkably transactional, and somewhat underhanded: he purchased the birthright from him when he was very hungry for a bowl of soup, and then stole their father’s blessing. This week, things continue in the same manner, with Yaakov working for Lavan in order to gain his permission to marry his daughters – and here it is Yaakov who is tricked when Lavan switches Leah for Rachel - and then becoming wealthy by manipulating the way Lavan paid him for his work as a shepherd. This last bit of commercial sleight of hand is even referenced by Shylock in The Merchant of Venice as an example of good old Jewish business acumen.

If one gets a bit uncomfortable thinking about all of this sharp commercial dealing Yaakov was involved in – keeping in mind the anti-Semitic cliché of Jews and money – it only gets worse when we look at the start of our parsha.

Yaakov has left home, and spends his first night sleeping rough. After the famous dream of the ladder with the angels and God’s speech promising him progeny, the land of Israel, and protection, he awakes, and makes God a deal. “If God will be with me and watch over me on this road that I am walking on, and gives me bread to eat and clothing to wear, and I return home in peace to the house of my father, and the Lord will be a God to me, then this stone which I place as a monument will be the House of God, and I will give Him a tenth of all that He gives me.”

Now I’m really uncomfortable. It’s one thing for Yaakov to deal sharply with Esav and Lavan, they deserve it, they themselves were far from being paragons of virtue and, besides, that’s how things work in the world. But does Yaakov have to be so commercial in his dealings with God - if He will take care of me I will repay Him? That’s a funny kind of faith, based, apparently, on mutual interest alone, just like in any business arrangement.  And besides, in the dream, God just promised him that He would take care of him and his descendants; why does Yaakov need to turn God’s already proffered care, mercy, and generosity into a deal?

I’d like to think about an explanation by looking at Psalm 146, which is recited daily in the morning prayer: “Trust not in princes, nor in the son of man, in whom there is no help.…Happy is he who has the God of Yaakov helping him, whose hope is in the Lord, his God, who makes the heaven and earth…He does justice for the oppressed and gives bread to the hungry, He frees the prisoners. God makes the blind see and lifts up those who are bent down…God watches over the stranger; the orphan and widow He supports, and makes crooked the way of the evil ones.”  I

These remarkable verses create a clear tension between the evil people, who oppress, and the poor, the stranger, the widow and orphan, who are oppressed by them, and place God clearly on the side of the oppressed.  On a par with being He who created the heavens and earth, God is He who gives bread to the hungry, and frees the prisoners. In the ongoing class war which the Psalmist describes, we know which side God, the God of Yaakov, is on – not with the princes, but with the poor. This choosing of sides by God in an ongoing, unfair class war is expressed most sharply in the Shabbat and holiday prayer Nishmat: “…Oh, Lord, who is like you, who saves the poor person from he who is stronger than him and the poor and impoverished from he who robs him?” For every poor person there is a stronger, more powerful, robber, against whom God stands.

Yaakov knows that life is transactional. We all need things, and we need to find ways to get them, often from people who are stronger, richer, and more powerful, who don’t want to give them to us, don’t want us to have them. In dealing with the evil, stronger, wealthier Esav and Lavan, Yaakov, as the Psalmist suggest, doesn’t trust them, stops at almost nothing, and plays their game – his hands are, indeed, the hands of Esav. When it comes, however, to dealing with He who one really needs to depend on for what is really important, Yaakov, while understanding that his relationship with God is still part of the way the world works – it is transactional – knows that, when it comes to God, you are not dealing with powerful, evil, oppressors, or untrustworthy mortals, you are dealing with the creator of the world and, more importantly, He who feeds the hungry, and supports the oppressed. With God, the relationship is still transactional, but completely honest, above board, generous, and just.

Which is why Yaakov understands God’s promise of children, the land, God’s protection, while very kind, also demands something from him. God’s loyalty and generosity will be matched by Yaakov; he will build a house for God, and give tithes - the Radak says that he will give from the property God grants him to needy people, who will then themselves, apparently influenced by Yaakov’s kindness, be God-fearing. He will match God’s goodness and generosity with his own.

The transactional nature of our lives is as Marx describes it – made up of oppressed and oppressors, those who have, and take advantage of those who do not. God, on the other hand, is on the side of the needy, the stranger, the weak, but he does demand a quid pro quo from them for His support: that they, in turn, be generous, charitable, and not oppress the poor, the weak, the stranger. Just like Him. That’s today’s lesson in Judaism as liberal, left wing, economic and social justice.

These verses create a clear tension between the evil people, who oppress, and the poor, the stranger, the widow and orphan, who are oppressed by themRabbi Shimon