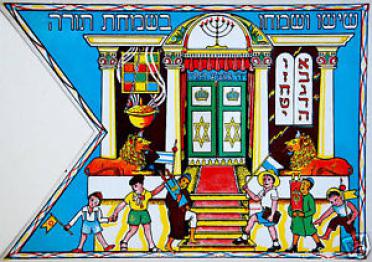 The seven-day holiday of Sukkot is immediately followed by Shmini Atzeret – often translated as the Eighth Day of Assembly. This one-day holiday – celebrated as two days in the Diaspora – is a difficult-to-understand add-on to Sukkot. It is not part of the Sukkot holiday, as we do not shake the lulav or sit in the Sukkah on this day, and yet it immediately follows that holiday, which certainly implies a connection. Though different, they feel like they go together.

The Rabbis of the Midrash and Talmud deal with the connection between these two holidays by first noticing that the sacrifices offered in the Temple become very different as we move from the seven days of Sukkot to the Eighth Day. Rather than offering a large amount of bulls, rams, and sheep, as we do every day of Sukkot, on Shmini Atzeret only one bull and one ram are offered, along with seven, rather than fourteen, sheep. This reduction in the number of sacrificial animals, in addition to the fact that there is no mitzvah of Sukkah or lulav, leads the Rabbis to see the Eighth Day holiday as a kind of intimate after-party: after the major seven-day holiday of Sukkot, during which many, many animals are sacrificed – including a total of seventy bulls, traditionally seen as representing the seventy nations of the world other than Israel – the eighth day is a chance for God to quietly be alone with His people, a  last day together before we leave the physical space of Jerusalem, where the Sukkot pilgrimage took us, and the holiday ends. The Eighth Day is one last, intimate embrace between the Jewish people and God, before they part.

This closeness, this intimacy, eventually was expressed in the way the Eighth Day ultimately came to be celebrated: as Simchat Torah, the celebration of completing, and beginning again, the yearly cycle of reading the Torah. What better way to focus on Israel’s special, unique relationship with God than to celebration the Torah He gave us, and our dedication to it? The metamorphosis of Shmini Atzeret into Simchat Torah is a logical expression of the idea of Shmini Atzeret as an especially intimate time between God and His chosen people, and it is no wonder that it is such a beloved and popular holiday, coming immediately after Sukkot, but with its own identity.

Maimonides (also known as the Rambam, an acronym for Rabbi Moshe ben Maimon), however, in his Guide for the Perplexed, sort of spoils the party. His explanation of the nature of this Eighth Day holiday is much more mundane. He points out that Sukkot, though certainly a wonderful, joyous, pilgrimage festival, celebrating both the harvest and God’s protection of the Israelites in the desert, is hampered by one thing: you have to sit in a Sukkah, and the vast majority of Sukkot are simply not that big. This gets in the way of holding really major celebrations: large families, communities, groups of friends who want to get together on Sukkot will, typically, not be able to fit into one Sukkah. For this reason, the Torah decided to tack on Shmini Atzeret. With all of Israel gathered in Jerusalem for the Sukkot holiday, The Torah gives us an added day when we do not have to sit in the Sukkah, so we can have a really big get-together, a major blow-out in a hall or even a stadium, if we like. Shmini Atzeret is, according to Maimonides, simply a practical solution to the problem of small Sukkot, a way to more easily facilitate, during this holiday season, family and communal get-togethers on a bigger scale than we could manage inside a Sukkah.

What the Rambam is doing here is remarkable, in its very normalness. Although he was certainly aware of the Rabbis’ beautiful, poetic understanding of Shmini Atzeret as a time for a mystical, intimate union between Israel and God, he ignores that understanding, explains the holiday in much more pedestrian terms: it is a practical solution for how to have really great family and communal get-togethers without the burden of having to do all your celebrating in rather small, temporary booths. By creating this Eighth Day for these simple, practical, social reasons, the Torah is teaching us that these concerns are of equal importance to the more obviously “religious” concerns of the Biblical holidays. The Rambam is telling us that the basic demands of life, such as arranging for successful get-togethers with family and friends, are also part of what the Torah is concerned with and legislates for. Religious activity is not meant to be at odds with normal, everyday life; it is meant to facilitate it.

This apparently simple lesson is not, actually, so simple. There is often a tension between every-day life and the religious experience, in which the former is seen as worldly, practical, physical, and therefore lesser, while the latter is seen as transcending the mundane, quotidian concerns of community and family, and therefore more important. Maimonides here is coming down on the side of the real, the everyday, and teaching us that these basic needs are extremely important, and must be given their space, even in a “religious” life, which does, at times, strive for transcendence.  The sheer normalness of the Rambam’s Shmini Atzeret strikes a blow for the importance of life’s basic concerns, and frames them as concerns which the Torah shares, and mandates.

For the Jewish people, who lived in exile for the past 2000 years, this tension was often seen as particularly acute. With no political autonomy, our daily lives were seen, from a religious perspective, as profoundly dysfunctional, and it was primarily within a more purely “religious” framework that we felt we could function successfully, that we could fully do the Jewish thing. Returning to the Land of Israel, and political, cultural, and social autonomy, we now again have a chance to fully realize the importance of the every-day, of life itself, as we live it in a socially and culturally Jewish framework, in which the nuts and bolts of friends, family, community, and culture can be seen as being just as important, from a Torah perspective, as the more rarefied spiritual heights we also aim for.

May we enjoy, this Shmini Atzeret/Simchat Torah, both the spiritual and the practical, every-day gifts we have been given.

Shemini Atzeret  - the Holiday of the Eighth Day - follows immediately upon the seven days of Sukkot, but is not part of that holiday: we do not sit in the Sukkah or shake the lulav. It is seen as a kind of bonus holiday, an opportunity to wind down from the ritual-filled Sukkot festival with a day dedicated to a virtually ritual-free closeness to and communion with God and our Jewish brothers and sisters. Over the centuries, it became a holiday to celebrate the end of the cycle of weekly Torah readings, and the start of a new one, with the beginning of Genesis. This day is called Simchat Torah. In Israel, this is a one-day holiday, as in the Torah. In the Diaspora it goes on for two days, with the first day being Shemini Atzeret and the next being the Celebration of the Torah.