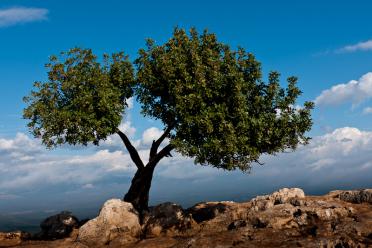 A lot of people are disappointed with Barak Obama. I’m not talking about the “Birthers” and the “He’s a Muslim” characters. I’m talking about people who always saw him as smart, full of good ideas, right on how to fix the economy the other guys ruined, right to make a dent in America’s health care fiasco, and, in general, on the right side of most issues, but now feel he is not doing so well on a number of domestic, and, especially, foreign policy fronts.

Having said that, there are obviously a number of great things he has done and said. One of them, which came under a lot of Republican fire in the 2012 presidential election, was his statement that "if you've been successful, you didn't do it on your own." If  have built a business, a company, you need to understand that you didn’t do it alone. There is a whole society out there that builds and maintains the roads and bridges, educates you and your fellow citizens, keeps the internet going, along with the electricity, the airports, the factories, and all the stuff that makes modern life possible, and the people who do all that are, in fact, your partners - "we're in this together." Though the Republican hounds bayed, I think this is a sensitive insight. We are not alone; we are all in this together, caught, in a beautiful and exciting way, in a web of human imagination, energy, and activity. Just a walk down the street of any big city, or a moment in front of the computer screen, should make that clear.

Tu B’shvat has, I think, a similar lesson to teach us. Tu B'Shvat began as a non-holiday. It had a technical role in determining the growth cycle of fruits. The fifteenth of Shvat is a cutoff point for tithing fruits: those which start to grow between one Tu B’shvat and the next belong to that year’s crop, those which start to grow after the second Tu B’shvat belong to next year’s. Much later on, the day became a minor holiday, celebrating trees and their fruits, God’s and the earth’s bounty, and nature in general. It has a special resonance in Israel, which is wrapped up in the classic Zionist stress on the land, farming, and an appreciation for all the good we now enjoy here, in our home, where we are free to enjoy it.

As such, a story in the Talmud (Ta’anit, 23a) has become the go-to text to study on this day. It is the strange story of Honi Ha'ma'agel, Honi the circle-drawer. He is first introduced in one famous story, in which he was asked by the Jews of Israel to pray for rain during a drought. At first, God did not answer his prayers satisfactorily, bringing either a skimpy amount or too much. Finally, Honi drew a circle around himself and threatened to not leave it until God made it rain nicely, the way it's supposed to, which He did. In this story, Honi is, obviously, associated with rain, growth, and nature, as well as being depicted as someone with a particularly close, almost father-and-son type of relationship with God, in that he could get away with this fairly outrageous kind of childish behavior, because God loves him.

In the next story, which I will focus on, Honi sees someone planting a carob tree. As carobs take a particularly long time to bear fruit – seventy years, according to the guy planting it - Honi asks him why he is bothering, as he will probably not live to eat any carobs from it. The man answers with a beautiful statement: “I came into a world containing carob trees. As my ancestors planted for me, so, too, I plant for my children.”

Honi then sits down to eat, and falls asleep. He sleeps for 70 years. When he awakes, he sees the grandson of the man who planted the carob eating its fruit, and realizes what has happened. He walks to his home where, naturally, none of his descendants   recognize him, or believe that it is, in fact, him, as they assume that Honi died long ago. His next stop is the Bet Midrash – House of Study – and there, too, no one believes him when he claims to be Honi. Feeling completely alienated, misunderstood, and alone, he prays for mercy, and dies. In an explanatory coda, the sage Rava says that this illustrates the popular saying או חברותא או מיתותא – give me companionship or give me death.

The journey Honi makes, from someone who questions the wisdom of planting a tree whose fruits you will not live long enough to eat, to someone so rejected and alone that he prefers death to his loneliness, is extremely important for us to understand. At first, Honi sees things from a selfish, short-sighted, utilitarian, perspective. He is concerned only with himself – why plant a tree whose fruits you yourself won’t eat? - and does not think about or feel gratitude or responsibility towards others: generations past, or generations to come. He does not see his connectedness to the world as a community in time and space, of which we are a part, and which we benefit from and can be of benefit to. He doesn’t get the planter’s credo: “I came into a world containing carob trees. As my ancestors planted for me, so, too, I plant for my children.”

Then, transported through the magic of a seventy-year sleep to a world in which no one knows or cares who he is, he learns a bitter lesson: No, Honi, you were not alone, as you selfishly thought you were. You were benefiting from the love, support, interaction, respect, and efforts, of others. You were actually part of a family and a society, a world, which supported you, fed you, made life sustainable for you. Barak Obama is right – whatever you did in your life, you didn’t do it alone. Now, seventy years later, in a world where nobody knows you, look what it really means to be alone! Understanding his predicament, Honi asks for death, having apparently learned his lesson: life alone is not worth living, is not livable.

The fact that this story is told around the planting of a tree makes it particularly relevant not just for Tu B’Shvat, but for all of us today. Those who would have us ignore the awful impact we are making on the planet, and deny that we are destroying any chance for our children and grandchildren to live normal, healthy lives; who selfishly count their profits while ignoring the consequences of our actions, are behaving just as Honi did: selfish, unseeing, childish in their focus on themselves and their immediate needs. Tu B’shvat, by celebrating the long cycle of growth that the tree represents, and the fruits of that cycle, reminds us that, just as plants and trees are, as all life is, we are interdependent, we are interconnected, to a past, a present, and a future, to the people in our neighborhood, to those in the country next to us, and to everyone around the world. If we don’t learn this lesson, what kind of world will our children be living in in seventy years?

The 15th day of the month of Shvat is celebrated as the New Year of Trees. Originally, the date was the cutoff point for tithes; fruits grown before the date belong to one year, those grown after the date belong to the next.  This day comes as winter in Israel starts to wind down, and most of the season's rain will have fallen by Tu B'Shvat. Over the years it has taken on both a Zionist and ecological meaning. In Israel, trees are planted as part of the effort to settle and reforest the land, a major part of the classic  Zionist ethos. The day is also seen as a celebration of nature and its abundance, and an opportunity to redouble our efforts to preserve the environment.