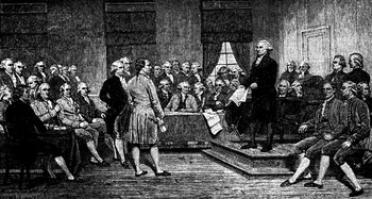 Lately, it seems that a week doesn’t go by without my reading or hearing something about the supposed clash between Jewish and western values. One of the key elements of this conversation revolves around the claim that western values - in fact, the entire western discourse - are couched in terms of “rights”, whereas the Jewish tradition is all about “obligations”, while the notion of the rights of individuals or groups is basically non-existent in traditional Jewish thought.

At first glance, this might seem to be true. Mitzvot – commandments – are central to Jewish life and thought, as is the gigantic, ubiquitous, still-evolving code of Jewish law, the halacha, which certainly is a series of dos and don’ts covering every aspect of life; a superstructure of obligations.

However, I believe that the rights/obligations dichotomy is false. The Jewish tradition, though certainly full of demands and legal constraints – like every society -  is, in fact, also extremely concerned about the rights of individuals, and is protective of them. I will illustrate.

In the first of the two parshas we read this week, Va’yakhel, we are told of God’s choice of Bezalel and Oholiav to be the lead architects/designers/craftsmen in the building of the Tabernacle. Bezalel is from the tribe of Judah, a tribe whose namesake, Judah the son of Yaakov, distinguished himself among his brothers, and from which will come the royal family of David. Oholiav, on the other hand, is from the tribe of Dan, a tribe which Rashi tells us is among the lowliest. And yet, Rashi says, the Torah equates the two men, and sees them as equal partners in the task of building the Mishkan. This, Rashi says, is a fulfillment of a verse from the book of Job (34, 19): “And He [God] does not show favoritism to princes, nor does He regard the rich more than the poor.”  Now, whether this means that choosing Oholiav was an early example of affirmative action, or just that Rashi is impressed by how the Torah gives the two men equal billing, even though they are from opposite ends of Israelite society, the clear message is that God believes in equal rights – Oholiav’s right to be given a job he is capable of doing in spite of his lack of pedigree and social standing, as well as his right to be given equal credit, along with his more illustrious partner, Bezalel. As the verses in Job say, God does not show favor to princes, or the wealthy, He treats them the same as the lowly, “for they are all the works of His hands.”

This basic concept, that the rich and the poor, the weak and the strong, are all God’s creatures, and are equal in His eyes, and that this confers equal rights on them – like Oholiav’s right to work, in a management position, on the Mishkan, and to be credited for it - is absolutely central to Jewish thought. One of the most striking and full-throated examples of this is found in a Mishna in Tractate Sanhedrin (chapter 4, Mishna 5). The Mishna speaks about the sanctity of life, the right to a fair trial, and the right to life, of all individuals. The Mishna roots this thinking in the Biblical creation story: God’s creating one man, who is the father of all humanity, means that we are all equal, descended from the same father, all equally God’s creations. The Mishna also points out that we are all, as Adam himself was, full of infinite potential (all those descendants he had), and we therefore all deserve respect and consideration. The insistence on our common humanity, and on the unique value and potential of every individual, is the very basis of western thinking about equality and human rights.

The holiday of Purim, which we just celebrated, is predicated on Mordechai the Jew’s belief that he had every right in the world to disobey the order of Haman, and not bow to him, even though he was a stranger, an outsider, in the Persian Empire, and Haman was second to the king. The exodus, which we will celebrate in just a couple of weeks, on Passover, was triggered by Pharaoh’s refusal to allow the Israelites to take a few days off from work, go out into the desert, and worship their God. Moshe, by making this demand, is assuming that Pharaoh, while he may have the right to enslave the Jewish people (ancient world, ancient laws), the Israelite slaves have the right to religious expression. These two seminal holidays of redemption, Purim and Passover, are both based on a clearly articulated belief that kings – even kings - do NOT have the legal or moral standing to deny their subjects their basic rights.

The entire Jewish attitude toward royalty is, in fact, deeply ambivalent. The Torah doesn’t actually command us to have a king, and concentrates on limiting royal powers and possessions in the event that we do have one, thereby protecting the rights of his subjects. The prophet Samuel begs the nation not to crown a king at all, explaining that a monarchy is a bad idea, as it will necessarily lead to an abrogation of the rights of the king’s subjects; he will do what kings do, and take from his subjects whatever he wants.

This anti-royalist position, which is rooted in a concern for individual rights and freedoms, is expressed three times a day in the silent Amidah prayer. We ask God to “restore to us our judges as of old, and our advisers as in the beginning, and remove from us sorrow and sighing, and reign over us, oh Lord, you alone, in kindness and mercy, and give us legal justice”. Clearly, this blessing rejects the notion of an absolute monarch (other than God), as that would invite a trampling of the universal right to justice. We ask instead for fair judges and wise advisers, rather than monarchs, so that our rights, as creations of God, as subjects of God, will be protected.

Just as our parsha insists on the basic humanity shared by Oholiav, from the lowliest of tribes, and Bezalel, who was from the most royal, the Jewish tradition, again and again, underscores the unique value of every human being, and, as such, the basic human rights that he or she deserve. (With some exceptions; not every Jewish thinker got it right, nor was every Jewish thinker immune to biased, primitive, illiberal thinking.) The western assumption that we all enter the world with equal rights is, rather than being at odds with the Jewish tradition, actually a product of it.

The Jewish tradition, again and again, underscores the unique value of every human being, and, as such, the basic human rights that he or she deserveRabbi Shimon