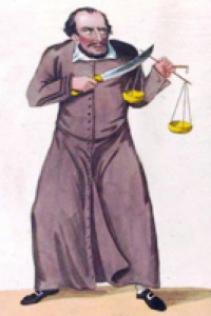 The claim that Jews love money is a well-known – perhaps the best known – trope in the moronic blather of anti Semites, from right, left, or center. Today, between fantasies about the Rothchilds, Soros, and the Jews “owning” everything from the media to the banks to the Fed, it figures prominently in all of their childish ravings.

In this week’s parsha, Matot, there is a famous example of some Jews who do seem to love money, property, to such a degree that it seems more important to them than their nation, their wives, and their children. Like the man says: Let’s take a closer look.

At the end of Parshat Matot there is the story of the tribes of Reuven and Gad. As the Israelites approach the land of Israel, after forty years of wandering in the desert, these two tribes approach Moshe, point out to him that they have extensive livestock, and ask if they may opt out of crossing the Jordan into the Promised Land along with the rest of the nation and, instead, settle where they already are, east of the Jordan, where there is extensive, excellent, grazing land.

Moshe, naturally, responds angrily, and says that, just as their parents did forty years earlier when, in the sin of the spies, they decided they would rather return to Egypt than fight the Canaanites and conquer their land, the men of Reuven and Gad are tempting the people to again abandon God’s plan, not enter Israel, and return instead to Egypt, or alternatively, remain elsewhere, outside of the land.

After a bit of backing and forthing, the tribes agree to cross the Jordan, fight alongside the rest of the nation, and only then return to Trans-Jordan and settle there permanently. This is what they say: “Animal pens we will build for our flocks, and cities for our little children, and we will go before God into war….we will not  return to our homes until the people of Israel take possession of their share of the land” (Numbers: 32,16).

Moshe accepts their proposal but, as the Rabbis of the Midrash, whom Rashi quotes, draw to our attention, with a slight but significant change to their words: “Build yourselves cities for your young children and enclosures for your livestock” (verse 24), he says, reversing the order in which they put these things in their original statement. Rashi explains that the men of Reuven and Gad “cared more about their money than they did about their sons and daughters, which is why they mention the flocks before the children” (the kids before the kids. Sorry), and Moshe corrects them, placing the children first.

According to this careful reading, Moshe is leveling a classic charge at the tribes who would choose to remain outside of Israel, even while supporting – actually fighting with – their Israeli brothers: it’s all about the Benjamins (I don’t know what’s gotten into me today). By flipping the orderof their concerns, he is saying to them: Your allegiance to your property trumps your other, more important allegiances, to God, the nation, the land, even your own families.

OK, so two of the tribes, plus half of Menashe, who will soon join them, do have an inordinate, inappropriate, love of money. That’s not all Jews, right? The majority, like Moshe, have their priorities right, right?

I would hope so, but I would also like to see if I could understand the two and a half tribes, and be מלמד זכות – find a positive explanation – for their attitude and actions.

At first glance, this seems to feed into the classic anti Semitic charge that Jews care more for their money than they care for life itself, as Shylock equates his life with the “means whereby I live”, and seems to prefer dying to living without those means. But is he so wrong? Poverty is awful, and chaza’l – the Rabbis of the Talmud – do equate it with death. Perhaps Shylock is simply being realistic; destitute, I am as good as dead, and will, in fact, probably soon die. His is right: life really does depend on the means to sustain it.

But then, if this is the case, we might ask: did Moshe not understand them? Why did he need to remind them that their children are more important than their property? They may well have known that and, as we said above, really only cared about the property as a way to sustain the children, and themselves. Was Moshe not familiar with The Merchant of Venice?

Perhaps Moshe did understand Shylock, and is pointing out that, although, technically, Shylock may be right, and we do need to appreciate the importance of being able to feed and shelter ourselves and our families, from a parenting point of view, we first need to relate to and focus on our children as people, to relate to them not, first and foremost, as an economic responsibility, as a financial project. We all, correctly, want to make sure our kids are taken care of, are on a good career path, and get the best start we can give them. But before all that, we have to be looking at, relating to, and putting first, who they are, and our personal relationship with them. Only after that, after being with them, and not their economic needs, should we deal with figuring out how in the world they will ever afford to buy an apartment. Shabbat Shalom,

Matot begins with laws pertaining to oaths and the need to live up to them, specifically focusing on the ability a father or husband have to nullify a woman's oath. As the Israelites approach the Land of Israel, they fight the Midianites, and we are given details about their victory and the laws pertaining to the spoils they took. The parsha ends with the tribes of Reuven, Gad, and half of Menashe making a deal with Moshe that allows them to settle in the land east of the Jordan River, which suits their economic needs, as long as they agree to fight with their brothers to conquer the Land of Israel, west of the Jordan.