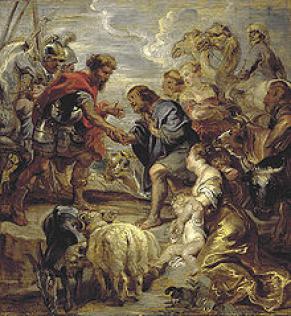 This week’s parsha, Va’yishlach, has generated what is, in certain circles, one of the most often quoted statements in Rabbinic literature. The statement is made by Rabbi Shimon bar Yochai, and people tend to quote only the first half of it, and actually reference a late, faulty version. It goes like this: “It is a halacha (Jewish law) that we know that Esav hates Yaakov.” Originally referring to the hatred Esav had for his brother Yaakov for buying the status of first born from him for a bowl of lentils, and subsequently stealing their father’s blessing - and perhaps other sibling issues - this fraternal discord is believed to continue between the descendants of Yaakov and the descendants of Esav, understood by Jewish tradition to be Rome and, subsequently, the Christian church. The statement is liberally thrown around when discussing the Holocaust, anti-Semitism, anti-Israel activity, and the general violent animosity the non-Jewish world in general has for the Jews. It is used, in this version, as a halacha, a law, a rule, something that has been determined and is now unassailable. It is often used to justify and even encourage enmity and violent action against non-Jews because, after all, the halacha says they hate us.

It’s time for a closer look. The origin of Shimon bar Yochai’s statement is early in Va’yishlach, when Yaakov meets his brother Esav for the first time in over twenty years. Knowing that Esav hates him for taking the birthright and their father’s blessing, Yaakov is afraid that Esav will fight, and perhaps kill, him, and makes lengthy diplomatic and military preparations for their meeting.

When they finally do meet, the Torah tells us that, seeing Yaakov, his family, and possessions, Esav runs to greet him, embraces him, falls on his neck, kisses him, and the two brothers weep.

The word וישקהו – and he kissed him – is written in the Torah with a dot over each letter. These dots, which appear a few times over words and letters in the Torah, are usually understood by the Rabbis to hint at some dual meaning: the text does not mean exactly what it says. It is only partially true, or true in some circumstances but not others, or refers to something other than what it appears to refer to.

In our case, there is a Rabbinic argument about what the dots over “and he kissed him” mean. One position is that they indicate that the kiss was not real, full-hearted; it was done without any real feeling. Others on this team go a bit further, and say it was not a kiss at all, and that Esav actually tried to bite Yaakov on the neck, and that Yaakov was saved by a miracle which turned his neck into marble, breaking Esav’s teeth. The other school of thought sees the verse as meaning just what it says: Esav and Yaakov were both moved to tears by their reunion, and the kiss was just a kiss, real and heart-felt.

According to this simple reading of the text, the question of the dots returns: if “and he kissed him” really means “and he kissed him”, what do they come to teach us? In the Halachic Midrash on Numbers, the Sifrei, Rabbi Shimon Bar Yochai explains the dots this way: “It is known that Esav hates Yaakov, but his mercy was engaged at that moment and he kissed him with all his heart.” According to Rav Shimon bar Yochai, the dots do something unusual: they tell us that even though our knowledge of Yaakov and Esav’s history would lead us to understand this kiss as being only half-hearted, or worse, and would encourage us to come up with a Midrash explaining the kiss as something else, we shouldn’t be so cynical, we shouldn’t let our knowledge of their personal history push us into a creative reading. Rather, we should just accept that Esav really was moved by this reunion to feel and show love to his brother. The dots tell us the opposite of what they usually do: don’t be clever here, don’t over think it, the verse means just what it says, in spite of everything that went before, Esav felt real love for Yaakov.

This second half of bar Yochai’s statement, that Esav really loved Yaakov at the moment of their meeting, and the kiss was real, is almost always left out by those who like to quote the “Esav hates Yaakov” statement, as it would contradict the supposedly absolute and immutable nature of Esav’s hatred. I want to also point out what Rabbi Eliav Shochetman has said, that it may be that “it is a halacha” is a mistake, and is not what was originally said, but was wrongly put in at a later date. This would take much of the sting out of the statement, changing it from some sort of eternal, immutable truth (as Rabbi Moshe Feinstein and others understand it) to just saying what we know from the story, that Esav hates Yaakov, which is actually a pretty obvious, simple, and straightforward thing to say. Of course he hates him! Yaakov stole Esav’s role as first born, stole the blessings, with their mother’s help (!) – how could he not hate him? But that hate may not be a “halacha”, some deep, officially recognized, unchanging reality, just a description of the way Esav felt, and the kiss indicates that, on this day, at least, he was moved by circumstance to feel very differently.

If this is the case, we have a very different picture of Esav and his hatred for Yaakov. His hatred is human, understandable, and, therefore, can be shifted, affected by events. As bar Yochai says, in the moment he is reunited with Yaakov, he really feels love for him; he is moved by Yaakov’s presence, behavior, and words. His feelings for him change, as feelings do.

I would hope that we opt for the position that sees the dots over the word “and he kissed him” as telling us to not overstate Esav’s hate, not lock into it, not make it a “halacha”, but to see it as a very human reality: when he had reason to, Esav hated Yaakov, and, when he had reason to, he loved him. That’s the way people are, not always consistent, not always coherent, but changeable; as circumstances and situations change, they do too. It is with this understanding that we, as individuals and as a nation, should deal with the people who may have reasons to hate us, but who can, hopefully, come to love us.

Esav's hatred is human, understandable, and, therefore, can be shifted, affected by events.Rabbi Shimon