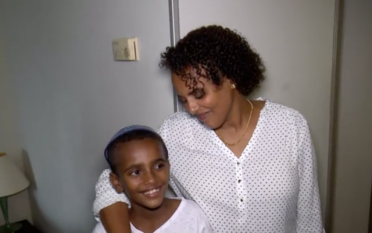 The other day, a rocket fired from Gaza hit a house in Beersheva. It was a direct hit; the house was damaged extensively.  Luckily, the mother of the family heard the alarm – in her sleep – and quickly woke up and grabbed her three children and got them down into the house’s bomb shelter, closing the door to the shelter just in time. I saw her on TV last night – she was unbelievably inspiring - and she said the following: I feel that I am a messenger from God, that I have a message for the people of Israel from God: Be sure to listen to the instructions you get from the civil defense authorities. Doing what they tell us to do saves lives.

Lech Lecha begins with God asking Avraham to leave his home and go to “the land which I will show you.” God promises him that all will go well there – he will be blessed, will become the father of a great nation – and Avraham goes. Almost as soon as he gets there, there is a famine in the land, and Avraham immediately goes down to Egypt to live, until he can safely return to Canaan, which he subsequently does.

How are we meant to respond to this turn of events? Is the famine, and Avraham’s journey to Egypt to escape its effects, meaningful, important, or just the weather? What might it tell us about Avraham, and his relationship to the land that God promised him?

Rashi, based on the Midrash Tanchuma (the Radak also takes this approach), says that the famine was a test. God, having just instructed Avraham to go to Canaan, and having promised him that all would go well for him there, wanted to see if the famine would cause Avraham to doubt, to question, God’s word. According to this approach, Avraham passed the test: he did the right, reasonable thing by going down to Egypt to save himself and his family, and keeping calm about it; he did not see this setback as a reason to doubt or disbelieve, he just made a temporary adjustment. We are not told what exactly he thought, but I would go for a “well, stuff happens, famines are not unknown. After all, God didn’t promise me an otherworldly, miraculous, perfect place to live, just a good one, so I guess I’ll just have to leave and spend some time in Egypt until the famine is over.”  This attitude is just what God was looking for: A+, Avraham.

Nachmanides (also known as the Ramban, 1194-1270, Spain and Israel), however, takes a very different view. He says that Avraham committed a great sin, albeit unknowingly, by going down to Egypt. Having been told by God to go and live in the land of Canaan, he should have had faith in the divine word, and stayed there, no matter what. His lack of faith and his cowardice in leaving, and, by doing so, endangering his wife Sarah by bringing her to the immoral country of Egypt, was a sin, one which was subsequently copied by his children who, years later, would also abandon the Promised Land in the face of famine, and be punished for doing so by being enslaved for years in Egypt, the very place Avraham modeled for them, in his cowardice, as the place to go when things get uncomfortable in Canaan.

For decades, I have preferred the Ramban’s approach to Rashi’s. The Ramban was a Zionist (an anachronous use of the term, but you know what I mean), disagreeing with Maimonides by counting the commandment to live in the Land of Israel as one of the 613 Mitzvot, and insisting that Jews must live there, and not allow the country to fall into foreign hands. He himself spent the last years of his life helping to rebuild a war- ravaged Jerusalem. His seeing Avraham’s behavior as a cowardly sin is of a piece with classic Zionist thinking: the Jewish people belong in Israel, the Diaspora is Exile, and it is never a solution for the Jewish people. As a Zionist, I liked this approach.

I still do, but, with the passage of time, I have come to se the value in Rashi’s view. Our Zionism needs to be tempered by a pragmatism, a realism, which sometimes demands “non-Zionist” behavior in order to guarantee the Jewish future, the Zionist future. Failure, setbacks, difficulties in Israel should not make us doubt the essential rightness of us living in our homeland, but neither should that essential rightness prevent us from finding the best practical solutions to whatever challenges we face here, even if those solutions seem to negate an absolute fealty to the maximalist Zionist ideal.

Rashi is telling us that our ideals, our ideologies, must always be tempered by a simple, basic commitment to the demands of everyday life, to reasonableness, to healthy, practical, common sense solutions to real-world problems. Avraham, in this view, did not sin. He is no less a Zionist for having left Israel when common sense demanded that he do so. He passes the test, remains faithful to God’s promise, by understanding that God’s word is not meant to negate any and all other real-life considerations, but, rather, is situated within them. We want to do the right thing, to do what God wants of us, but, since we live in the world, God’s will may sometimes need to be deferred, put aside for a while, in order to meet the needs of the world. This approach, in fact, would seem to be the best way to obey God: to make sure His will can be fulfilled, not with an ultimately destructive, even suicidal blind obedience to His commandments, but, rather, by living normally, reasonably, healthily, in the world He has given us, so that we can, ultimately, go on to do the right thing. This seems to me like a good idea in terms of our commitment to Israel, and, in fact, in terms of all of our beliefs and ideologies.

Our ideals, our ideologies, must always be tempered by a simple, basic commitment to the demands of everyday life, to reasonablenessRabbi Shimon

Parashat Lech-Lecha is the 3rd weekly Torah portion in the annual Jewish cycle of Torah reading.