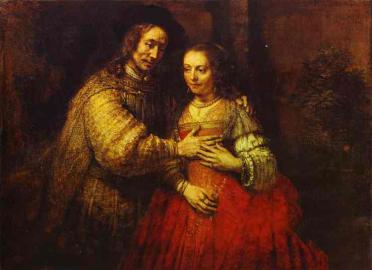 When the Torah tells us about the first couple, Adam and Eve, it does so in an interesting way. We begin with the possibility that a couple may be unnecessary: God seems to create man without a mate or partner, and only later He sees that "it is not good for man to be alone", and decides to make him a "helpful counterpart". He does so, fashioning woman from Adam's own rib, and Adam, seeing her for the first time, gives her an avid stamp of approval: "This is it, bone from my bone, and flesh from my flesh." He calls her woman, as she has come directly from man, and then, the Torah makes an interesting comment: "Therefore, man must leave his father and his mother, and cleave to his wife, and they will be as one flesh." Now, this is strange. There aren't yet any fathers or mothers to leave, or sons to leave them, so why does the Torah jump forward, into the future, and describe the union of men and women in these terms, terms which have nothing to do with Adam and Eve's situation? What does the “therefore” mean? Adam and Eve did not experience that – they had no parents. At this dramatic juncture in the lives of Adam and Eve, why refer to non-existent children and their parents?

Perhaps the Torah is pointing out an important parallel between the first male/female relationship and the way that men and woman, from now on - once Adam and Eve do have children and get the whole show on the road - would experience their interaction. Adam needed to lose something - his rib, and, with it, his status as the only human in the world, the only one to have a relationship with God - and discover something totally new - a mate, a partner. So, too, we, who do not, obviously, have precisely that experience, do go through something that is meant to be similar to it. We need to lose something, leave behind one set of very basic and important relationships, and create a new one. Just as Adam's relationship with Eve necessitated a major, drastic, somewhat violent change for him, so, too, marriage does for us. We do not flow smoothly from our lives as children, before we meet our mate, to the new reality of living, and creating life, with him or her. Something has to be lost, taken away, and changed dramatically. The evolution from being the son or daughter of our parents, and all that that relationship entails, to becoming an active, independent, mature adult human being, able to function fully as an independent adult, is not an easy one. It entails a leaving behind of one reality and the difficult entering into a new one. As much as we do want to continue to have a loving and supportive relationship with our parents after we marry, something must be given up, priorities shifted, a rib sacrificed, in order to create this new, ultimately more mature, dynamic, and fruitful relationship. We have to leave behind who we were, and become something new: a couple which sees their relationship as the central one of their lives, and which can then raise children, who will become mature and strong enough to leave them.

Marriage in Judaism is a value. God, the first match-maker, looked at Adam and said "it is not good for man to be alone", and created Eve. Since then, marriage has been seen as the natural, healthy state for men and women to be in, and the optimal framework for raising children. Although polygamy was practiced in most Jewish communties until about 1,000 years ago, when the Ashkenazi community forbade it,  much traditional literature seems to favor monogamy, and the Bible is full of stories of romantic love, as well as descriptions of the problems which typically ensue from polygamous marriages.

A marriage takes place when a man gives something of value to the woman - today we use a ring - as a token of their agreement to be married. The woman must consent, and willingly accept the object.  As this is a legally binding arrangement, two witnesses are needed to make the marriage official.