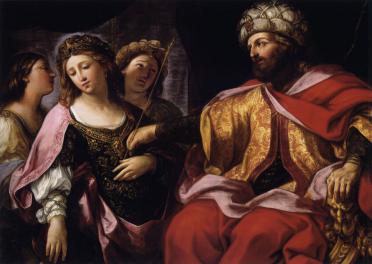 Megillat Esther is a rich text, as Biblical stories tend to be. Looking at it this year, in this time of Trump, with its “fake news”, nasty, silly stories about an old lady and a snake, and an ongoing argument about America’s children’s right to be safe as opposed to the right to misread, misunderstand, and misapply an outdated amendment to the constitution, one of the Megilla’s many themes really jumped out at me.

There are quite a few lies, secrets, and omissions of truth, in the Megilla. Haman misleads the King about the loyalty of his Jewish subjects, Bigtan and Teresh secretly plot against the king, and Esther manipulates both Haman and the King by inviting them to parties without revealing her real purpose. Of course, the crucial plot element is Esther’s “not telling” her husband, King Ahashverosh, who she really is. Revealing that secret is the card she plays when she finally does speak out, admits to her Jewish identity, and openly pleads for her people. In fact, Esther’s journey, her metamorphosis from an acquiescent, obedient, voiceless young woman, doing what Mordechai tells her, keeping her identity secret, and playing by the rules of the Persian court, into someone with a voice, an identity, a claim, is the essential narrative arc of the book. The story comes to its climax when the masks are removed, and the truth is finally spoken: Esther reveals who she really is, and who Haman is. Only by telling the truth can the existential threat to the Jewish people be successfully dealt with.

I have not kept it a secret that, like many others, I believe that Trump is totally and completely unsuited to lead, and, given the chance, will do tremendous damage to America and the world. I have made my position clear. However, I have read and heard about people who, in an attempt to be civil, get along with colleagues, friends and family, their community, have been less than forthright about their understanding of how dangerous Trump and his gang of incompetent, thuggish friends and family members are. I, also, sometimes find myself “not telling” – choosing to be polite, friendly, and end a conversation, change the subject, or half-heartedly agree with some statement or another made by a friend or acquaintance that supports this monster, rather than fully express what is so wrong with Trump and his administration.

Leaving America’s “tzures” (problems, in Yiddish) aside, here in Israel, I am facing a different but similar dynamic. As the years have gone by, more and more of the people I know have adopted positions on a number of topics, from the Israeli Rabbinate and its policies on conversion, pluralism, and other issues, to women Rabbis, the non-Orthodox denominations, the future of Judea and Samaria, and much more, about which I feel increasingly uncomfortable. My community is splitting, with a horrible move to the oppressive, misogynist, xenophobic, ignorant, Messianic right by many, and a much healthier evolving liberalism, openness, and progressive spirit by some. I find myself feeling that I want to hide myself, Esther-like, in many conversations I have, classes and talks that I give, and things I write, rather than really reveal who I am. I speak regularly on Friday nights at my minyan in the Shtiblach here in Katamon, and, though I am often pretty edgy by local standards, I find myself self-censoring, adjusting to what I know to be the majority attitude on one issue or another.

Maybe we have reached the point, in our communal life, like the one in the Megilla, where Mordeachai challenges Esther, who seems addicted to hiding, and staying silent, to reveal herself, to speak up, to take the risks entailed in total honesty and thereby, perhaps, save the day. Many have already done this (the fearless Rabbi Chuck Davidson comes to mind; there are others), and hold nothing back. Certainly, in Trump’s America, the time to take off any kid gloves we may still be wearing has long passed – the fantastic kids from Parkland have shown us that, again and again. And here in Israel, and in the American Jewish community, in its way, as the political and religious right gets bolder and bolder, and crazier and crazier, and less and less connected to any real Jewish values or thought processes, we Esthers, who have, to varying degrees, been hiding our identities, telegraphing our punches, and prettying up our messages, should speak out, loud and clear, against the horror of the Trump presidency, and the nasty anti-Torah foolishness of the Orthodox establishment.

Purim celebrates the victory of the Jewish people, in Persia in the fourth century BCE, over those who plotted to destroy them. Celebrated with the reading of Megillat Esther, feasting, drinking, carnival-like costumes, and gifts to friends and the needy, Purim takes place on the 14th day of Adar, and the 15th in cities that were walled in Biblical times, such as Jerusalem.