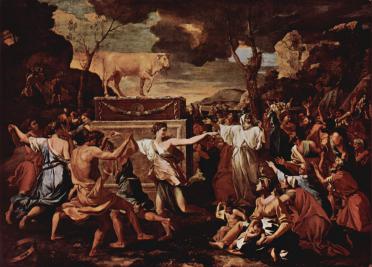 Parshat Ki Tissa contains the sin of the golden calf. The story of that sin presents a pretty simple question: if the people of Israel were so freaked out by Moshe’s failure to return on time from his receiving the Torah on Mt. Sinai, and really thought that he was not coming back, why did they not simply ask his brother, Aharon, the high priest, to take over? This would have been an orderly transfer of power to the person who had been Moshe’s number two from the very beginning of the exodus story. Aharon was already high up in the leadership tier of the nation, the natural choice to succeed his apparently dead or missing brother. This is underscored by the fact that, in their nervousness at Moshe’s disappearance, it is Aharon they turn to with the request to “make us a God”. If he is the obvious address for their needs, why not just ask him to lead them? Why demand an idol, perhaps even idols – the language of their request is in the plural – to take over for the missing Moshe?

It seems to me that the desire for an idolatrous ‘God’, rather than going with the obvious human choice of Aharon, is what this sin is all about. In choosing to worship an idol, the children of Israel are showing a preference for a religious expression which might seem to us moderns to be hopelessly antiquated and of little interest, but, upon reflection, is actually a crucial insight into our own situation.

The trigger for the sin of the golden calf is an extremely common, very human, occurrence: Moshe is late. Well, not really; Rashi explains that it was all just a misunderstanding – the people of Israel got their instructions mixed up a bit and mistakenly thought he was late in coming down from Mt. Siani; a very common, very human, event.

I believe that it is precisely the quotidian, all too human nature of this trigger that prompts the very dramatic response of idol worship. Once they believe that Moshe is gone, the Israelites gather around Aharon and ask him to “get up and make us Gods who will walk before us, for Moshe, the man (משה האיש), who took us up out of Egypt, we don’t know happened to him.” Notice the stress onהאיש  משה – Moshe, the man. What the Israelites are doing is to pointedly reject the notion of human leadership. Aharon would not have been a good replacement for Moshe because they don’t want “a man”, who can be late, missing, lost, to lead them, they want a thing (or things), gods, inanimate objects which can not, and will not, simply wander off one day and not return.  It is Moshe’s very humanity that they are rejecting.

It is worth noting that the same phrase, with the words reversed – האיש משה – is used by the Torah in the Book of Bamidbar in the sentence “and the man Moshe was very humble, more than any man on the face of the earth” in connection with the jealous slander spoken of him by Aharon and Miriam, his brother and sister. When stressing how good Moshe really is, and defending him from his siblings’ accusations, it is his humanity which the Torah stresses.  That is his most important leadership quality.

By choosing an idol, a golden calf, the Jewish people were engaging in a very basic human behavior, behavior which we see, quite dramatically, in young children. Children are extremely attached to inanimate objects. A favorite blanket, teddy bear, toy, or just a piece of plastic they were playing with, is often guarded very jealously (sometimes bordering, it seems to me, on the neurotic). Kids care a lot about things. So do adults. I need not waste time describing the way we relate to, care about, invest with magical qualities, and anthropomorphize our stuff: phones, clothes, cars (it drives me crazy how commercials equate cars with freedom, adventure, individuality, and personality, but they sort of do that with just about everything they sell, from crappy sugary drinks to jeans).

This infantile behavior, which is carried by all of us, to one degree or another, into adulthood, is the sin of the golden calf: preferring the relative certainty and security of things over the trickiness and give-and-take of a real relationship with people. Moshe proved just how human he was by simply not showing up when the Israelites thought he would. Realizing that Moshe is just that, a “man”, a real person, they opt for a toy, a fetish, an inanimate object, that will always be what it is, always under your power and control, and never let you down. It is very telling that the Torah describes what the Israelites do with the calf as לצחק – to play, fool around, disport themselves. They behaved as children do, with their new toy. This is such a terrible sin precisely because Judaism, if it is about anything, is about real relationships with real individuals, beginning with God, and moving on to our fellow human beings, from those who lead us to our closest family members.

The whole point of idol worship is that it is not a real relationship. Rather, it is a mechanistic system, in which worshippers hope to practice the right rituals in the prescribed manner and thereby push the appropriate buttons of whatever force they are trying to propitiate. Like a child’s blanket, the idol is a comfort, a comfort we can control. Unless my big brother or parents take it away from me, it is always there to supply me with whatever I ask for from it without a real relationship, a real give and take. It comforts me with its simple presence; it doesn’t do, think, or say anything.

Judaism’s relationship with God, on the other hand, is a covenant, a two way street, with a being, an individual, not an object. This is the model for all the relationships in our lives: they are meant to be reciprocal, dynamic, real, rather than the ritualistic interaction we have with objects – or the people we turn into objects by failing to truly relate to them. This can happen through a misplaced idolization of a leader or celebrity, or through the lazy unwillingness to really relate to friend or loved one.

The people of Israel, by choosing the golden calf, are not simply giving up on Moshe; they are giving up on the very idea of a real relationship, and opting for a “relationship” with an object, which is no relationship at all.

By choosing an idol, a golden calf, the Jewish people were engaging in a very basic human behavior, behavior which we see in young childrenRabbi Shimon