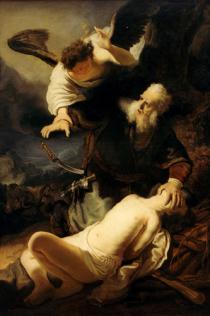 God’s commandment to Avraham to sacrifice his son, Yitzchak, and Avraham’s ready compliance, is an extremely troubling chapter. The questions are obvious: how could God make this strange, immoral demand, and how and why did Avraham agree to go through with it so quickly, with no argument or discussion?

The Midrash Rabbah (quoted in his commentary by Rashi) has, I believe, a very simple, yet tricky, and important, answer. When the story is almost over, and Avraham, about to sacrifice his beloved son, has been stopped by God, he asks a simple question: I don’t understand. First, you tell me that Yitzchak will be my heir. Then you tell me to sacrifice him, and now you tell me not to. What’s going on? God answers with a verse from Psalms: “I will not desecrate my covenant and the words of my mouth will not be changed”, which seems to mean here that God will keep his promise about Yitzchak being Avraham’s heir to the covenant that He made with him, but what God said about sacrificing him is also “true”. How so? Well, God explains to Avraham, I never said “sacrifice him”. I just said to “raise him up as a sacrifice”. You raised him up [dedicated him to Me, placed him on the altar] – now bring him down!

This word play – I never said ‘sacrifice him’, only ‘raise him up as a sacrifice’ – may seem a bit silly, at first glance – did God really expect Avraham to understand His words like that? -  but the meaning, and message, is profound.

God is teaching Avraham – and us – that when confronted with an impossible commandment, an unacceptable text, emanating from God, our job is to make it mean something more reasonable, more just, more moral, and more God-like. The text I gave you, God tells Avraham, should have been seen by you for what it is: something that can not possibly be taken at face value. You should have known that when seemingly asked by God to do something which contradicts God’s own law and covenant - how can He ask me to kill? My own son? My son whom He Himself told me is meant to be my heir? – you   are supposed to learn that text, interpret that commandment, so that it does fulfill the covenant, and it can be something which God could conceivably ask of you. Here, God says, I’ll show you how. Read it so that this is simply a ritual of love for and fealty to God, also expressing His choice of Yitzchak (the sacrifice is symbolic) and you are done. You don’t have to kill anybody; after all, I never really said you did, and it doesn’t make sense to read what I said that way.  Read the text carefully, humanely, in line with the covenant, and it will all work out.

This is the lesson of the Akedah, the Binding of Yitzchak: when asked by the Torah to do something which, read one way, contradicts what we know to be true about God’s covenant with us, we can, and must, reinterpret it to mean something more acceptable, more humane, and more Godly. We must have faith in the text, and in ourselves. That is what studying Torah, God’s word and will, is all about.

We must have faith in the text, and in ourselves.Rabbi Shimon