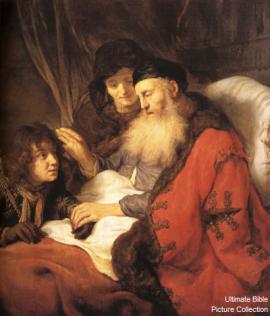 The Jewish people’s claim to the land of Israel is constantly in the news. Anti Zionists – shading into anti Semites – question our claim constantly, vociferously, and quite ignorantly. Jeremy Corbyn’s remarkable inability to apologize to Britain’s Jews for the hurt caused them by instances of blatant anti Semitism in the Labour Party stems, I think, from his inability to let go of his “criticizing Israel, being anti-Israel, is not anti-Semitic” mantra, even in the face of lunacy about the Rothschilds, the Mossad and 9/11, and the genocide Israel is apparently perpetrating against the Palestinians, even as their population grows and flourishes. I think he sees any admission of anti Semitism as a weakening of his anti Israel position, a position which, at its core, denies the Jewish people the right to self determination in their homeland, and therefore is, actually, anti Semitic.

I’d like to look at an aspect of our claim to the land in this week’s parsha, Toldot.

When Yitzchak leaves the Land of Canaan to escape a famine, he goes to the coastal area of the Gerar River valley, ruled over by the Philistine king, Avimelech (the modern-day Gaza/Western Negev area). Apparently, this was not his ultimate destination, as God appears to him and instructs him to not continue down to Egypt – a classic refuge in times of famine – but, rather, to stay in the land which had been promised to his father, Avraham. God goes on to assure him that he will be blessed, and that his children will, indeed, inherit this land, as promised to Avraham. Here is the text, from Genesis 26:“Now there was a famine in the land—besides the previous famine in Avraham’s time—and Yitzchak went to Avimelech king of the Philistines in Gerar.  The Lord appeared to Yitzchak and said, “Do not go down to Egypt; live in the land where I tell you to live.  Stay in this land for a while, and I will be with you and will bless you. For to you and your descendants I will give all these lands and will confirm the oath I swore to your father Avraham.  I will make your descendants as numerous as the stars in the sky and will give them all these lands, and through your offspring all nations on earth will be blessed. Because Avraham obeyed me and did everything I required of him, keeping my commands, my decrees and my instructions.”  So Yitzchak stayed in Gerar.”Many commentators understand God’s insistence that Yitzchak remain in Canaan on religious grounds: Yitzchak, offered as a sacrifice to God by his father Avraham, is simply too holy to leave the Holy Land. The Italian commentator Obadiah Sforno (1470-1550) takes a somewhat different approach. He points out the obvious, that Yitzchak’s reason for leaving was economic – due to the famine there was a shortage of grazing area for his flocks. God first promises to see him through that problem right here, in Gerar, obviating the need to leave. The Sforno then explains why God wanted him to stay: this is the land I promised to your father, Avraham, and his descendants. Therefore, by staying here, you will establish a legal claim of ownership, enabling you to pass it on to your heirs. In other words, God wants Yitzchak to remain not for personal, religious reasons, but for legal and political ones: to establish and strengthen his and his descendants’ claim on the land.

God then goes on to say why this right, this claim to indigeneity, was given to Avraham and his family: “Because Avraham obeyed me and did everything I required of him, keeping my commands, my decrees and my instructions.”

The claim to the Land of Canaan/Israel by the Jewish people – the descendants of Avraham and Yitzchak – is based on their ability to run their country decently, by, as the Sforno puts it, “constantly keeping My charge, the charge that is especially God’s, which is to treat people with chessed (kindly)…and to speak out against sin…and keep, also, the seven Noachide laws, to speak and behave as an example to the people.”

The Sforno is telling us that the Land of the Jewish people is ours through traditional natural, legal and political means – a claim based on a multi-generational presence in the land – and by virtue of our making sure that the society we set up in that land is a society of chessed – kindness – and the rule of law. This is why God wanted Yitzchak to stay in Canaan, and why He reminds us, in these verses, of Avraham’s and his descendants’ loyalty to the rule of divinely ordained law, a law of kindness. Failing that, it would seem our claim – and I would venture to say this is true of the claim of any nation to its land -  may well be forfeit.

God wants Yitzchak to remain not for personal, religious reasons, but for legal and political onesRabbi Shimon