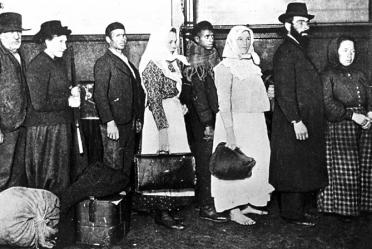 The treatment of the stranger, the foreigner, the immigrant, is right at the top of the list of hot issues being debated today. All over the world, migrants are being singled out as a problem, a danger, a threat, and as not deserving of the treatment we reserve for full, native citizens.

This is one topic about which the Jewish tradition certainly has a lot to say. In this week’s portion, parshat Mishpatim, we have a simple commandment – “And you shall not treat the stranger unfairly, nor oppress him, for you were strangers in the land of Egypt.” The Rabbis tell us (Tractate Bava Metziah, 59b) that this is one of 36 (perhaps 46, if you count the phrases differently) places where the Torah tells us to be kind to the גר, the stranger.

First, let’s define our terms: Who is this גר, this “stranger” the Torah is talking about? Rashi, commenting on our verse, explains: “Any time the word ‘stranger’ is used it refers to a person who was not born in a particular country, but has come from another country to live there.” It is worth noting that Rashi is telling us that the Torah accepts the legitimacy of this behavior: people may move from one country to another, and, even though they are not natives, they must be treated well.  The very acceptance of the simple rightness of this dynamic – yes, you can move from country to country, and, yes, in such a situation you have rights - is important. The ability to move from one country to another is not seen by Rashi as something which should be heavily regulated, or as intrinsically problematic; it seems to be something that just happens.

The fact that the Jewish people have very often (to understate it) been strangers in a strange land, and expected to be treated well in those lands, underscores the fact that our tradition does not look askance at foreigners turning up in someone else’s country. When the Israelites came as migrants to Egypt, they expected to be treated reasonably, and understood the behavior of Pharaoh and his people – enslaving and oppressing them – as evil, unacceptable, wrong. When Haman and Achashverosh mistreated the Jews of Persia, they were seen as evil oppressors. The Jews of Persia expected to be treated reasonably (to not be forced to bow down to Haman and betray their religious beliefs), and when they were not, they saw those who denied them their rights as oppressors. The Torah does not grant ‘natives’ the right to treat ‘strangers’ badly – the fact that one group of people have been living in a country for a long time does not give them the right to mistreat newcomers.

The classic second half of these many verses – some form of “for you were slaves in the land of Egypt” can be understood in a number of ways. On our verse, Rashi explains that if we were to mistreat migrants, that would be an invitation for them to mistreat us in return, as we also bear the stigma of having been migrants once, in Egypt (and, as Jewish history unfolded, again and again, all through the years of our exile). This is quite a revolutionary idea: people who consider themselves ‘natives’ are, actually, not always so native at all, but may well have had the immigrant experience. Since humans migrate, being a stranger is not only the Jewish experience, it is the human experience. The irony of someone like Donald Trump, whose own parents immigrated to America, casting aspersions on non-‘native’ Americans is obvious. Rashi’s point is that, if we start to treat people better or worse based on whether they are ‘strangers’ or not, we are actually endangering all of society, because all of us can be scapegoated in this way, singled out as somehow being lesser, as not really belonging, and therefore not deserving full rights and privileges.

According to this Rashi, the mistreatment of the stranger is the beginning of the end of just, civil society. If I make a hierarchy of more and less authentic citizens, more and less deserving citizens, I am creating a situation where everyone is invited and encouraged to do the same: to mistreat others because they are, in some way, not ‘one of us’. The law of treating the stranger well is actually the root of all decent society – the understanding that we are all equally ‘us’, we all equally belong wherever we are on God’s earth, and we are all equally deserving of the law’s protection and the full rights of citizenship.

People may move from one country to another, and, even though they are not natives, they must be treated well.Rabbi Shimon

Mishpatim contains a very wide range of legal material, ranging from civil law, such as what to do in the case of damages, assault, accidental death, and lost items, to ritual law pertaining to the holidays, kashrut, and the Sabbatical year, as well as laws about running a healthy society, such as loving the stranger, running a fair judicial system, and not lying, along with many more topics. After this potpourri of legal material, we learn more about the giving of the Torah on Mt. Sinai, and the covenant between God and the Children of Israel.