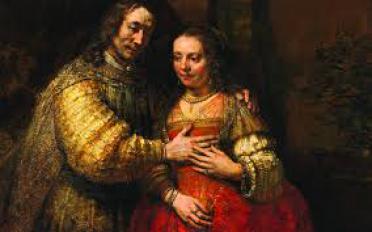 Famously, Bereshit has two different creation stories, one after the other. In the first, the creation of man is embedded towards the end of six full days of divine activity; he is part of the entire creation, integrated into a narrative about bringing the heaven and earth and all that is in them into existence. Actually, in this story we are not talking about a “he”, it’s a “they”: we are told that “male and female He created them”. Man and woman are created together, already joined, and are presented as if they were one being (according to the Midrash, they were created physically as one, and subsequently split into two), a being which is part of the entire created world, and everything in it.

In the second story, it’s all about man. The story begins with an already created earth, void of vegetation, and focuses on the creation of man. In this version it is just man; woman appears only much later, after man - a male, on his own - has been placed in the Garden of Eden and commanded about what and what not to eat. In this second version, man and woman have two separate creation stories; there is a lone man, and later, once this arrangement has proven to be unsatisfactory (“It is not good for man to be alone”), woman is created, from his “rib”.

Perhaps we can understand these two different narratives about man and woman this way. In the first version, man and woman are literally one. Just as man, in this story, is presented as being a part of a unified creation, only one element – albeit quite an important one – of six days of work, so, too, he and woman are also one, a single unit, a single being, created that way, as integrated, as together, as two people can be.

In the second story, man stands apart from the world God has created, and is only  subsequently introduced and integrated into it, placed in the Garden of Eden, in a sometimes tense relationship (eat this, don’t eat that, and, by the way, how is being all alone working out for you?) with it. So, too, with his wife: Man is alone, and Woman is created to fill a need of his. There is even a moment of uncertainty when they meet, resolved by the decision he quickly makes – “this time this is it, she is the one”. The Torah immediately encourages them to get, and stay, together – “therefore a man must leave his father and his mother and cleave to his wife, and they shall be as one flesh” – it takes an effort, they are not created as one, are not naturally one, they come from different places. They only become one through a difficult process of leaving and cleaving.

Perhaps all marriages have both of these dynamics: the need, and ability, to be one, the same being, almost the same person, on the one hand, and, on the other, the recognition of the fact that husband and wife are separate beings, who need to make an effort to “leave” things behind and “cleave” together, and who know that there is and always will be some essential separateness between them, a separateness which might even be the a good thing, as they, hopefully, again and again, meet one another and say “this time this is it, bone of my bone, flesh of my flesh.”

The two creation stories may be teaching us the essential dynamic of a marriage: yes, in one way, man and woman are one, totally integrated, essentially the same person. But they are also two separate beings, with separate pasts, needs, and desires. Bridging this gap and arriving at the oneness of the couple of the first creation story is what it may be all about, the job faced by every couple, as they try to respect, and balance,  the fact that they are, ultimately, two different people, who are trying to get past that fact and become one.

Shabbat Shalom, and Mazal Tov to my wonderful daughter, Talia, and her fabulous chatan, Yonatan,

Parashat Bereshit is the 1st weekly Torah portion in the annual Jewish cycle of Torah reading. It contains the Creation story, the story of Adam and Eve and their sin and expulsion from the Garden of Eden, and information about the generations between Adam and Noach, whose birth we are told of towards the end of the parsha. The parsha concludes on an ominous note: the people of the world are evil, and God decides to destroy them.