Parashat Hashavua Behaalotecha 2017 / 5777 - What's so special about the Menorah? The Personal Touch 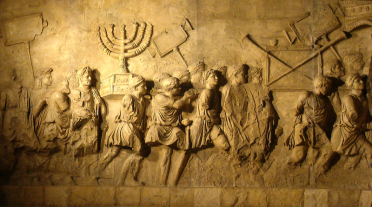 An interesting theme runs through the end of last week’s parsha, Naso, and the beginning of this week’s, Beha’alotcha. At the end of Naso, the נשיאים   - the heads of the twelve tribes of Israel, approach Moshe with an unasked-for gift – wagons, and oxen to pull them, for carrying the Tabernacle and its vessels. After Moshe is instructed by God to accept the gifts, and give them to the Levites, whose job it is to transport the Tabernacle, the heads of the tribes approach Moshe again, with another unasked-for contribution: a series of dedicatory sacrifices for the new Tabernacle, which are also accepted.

The Rabbis of the Talmud, and the later medieval commentaries, explain that these gifts were the result of the tribal leaders feeling left out. The Israelites had been asked to donate the materials necessary for the construction of the Tabernacle and its vessels. The tribal leaders held back, expecting the Israelites to fall short of the required materials and quantities, which they would then supply. The Israelites surprised them, and brought more than enough for the task, leaving the leadership feeling that there would be no contribution for them to make, no way for them to leave their mark on this important project.  That was the impetus for them coming up with an unasked-for solution to the problem of transporting the Tabernacle, and a creative way to celebrate its inauguration with a series of sacrifices.

What happens next, at the beginning of Beha’alotcha, is interesting. Aharon, the high priest, is told by God how to light the Menorah in the Tabernacle. The Rabbis try to understand why this story follows the story of the tribal heads and their gifts, and come up with a fascinating scenario. When Aharon saw the voluntary gifts being brought by the leaders, he lamented his religious status, feeling that his ritual activity is inferior to their contributions. Now, this is a bit strange coming from the high priest, who has lots of important ritual to do every day, all year long, in the Tabernacle. Nachmanides clarifies his jealousy by explaining that what upset Aharon is the voluntary nature of the act of the leaders. They brought offerings which were not asked for, while Aharon is called upon to simply follow instructions; there is no creativity, no personal statement, no innovation, in what he does as high priest. That is why he’s jealous.

According to Nachmanides, God reassures him with the ritual of lighting the Menorah because that hints at the volunteerism of Aharon’s descendants, the Macabbees, who, centuries later, will  step up to fight the Greeks and reclaim and rededicate the Temple, miraculously rekindling the Menorah in the process. That act of volunteerism, of stepping up and doing something that is not specifically demanded of them, is at least as good as, if not better than, the innovative and unasked-for gifts of the tribal leaders.

What is fascinating in all this is the stress on finding one’s own unique, personal contribution to religious life. The heads of the tribes wanted to stand out, and contribute something to the Tabernacle which had not been given by anyone else; that was the impetus behind their innovative gifts. Aharon was jealous of that dynamic, and dissatisfied with the obedient, rote, by-the-numbers nature of his religious activity. He is reassured by the promise of a voluntary, from-the-heart act to be done by his descendants in the future: the Hasmonean rebellion against the Greeks, their rededication of the Temple, and their lighting of the Menorah.

There is a phrase which appears a few times in our liturgy – in the Sabbath amidah (silent prayer), at the end of every day’s silent prayer, and elsewhere: ותן חלקנו בתורתך  - and grant us our portion of Your Torah. Many years ago, one of my wonderful teachers, Rabbi Nosson Kaminetzky, pointed out that with this phrase we each ask for our own חלק – our own, personal, unique, piece of the Torah, our own understanding, our own path, in our religious lives. This is what we are meant to strive for in our lives as Jews - to be alive to the possibilities and opportunities to carve out our own חלק - our own share - of Jewish life, meaning, and ritual. Just as the tribal leaders and Aharon looked for, yearned for, ways to make a personal imprint on Jewish life, so, too, we are told to ask for our own, personal, piece of the Torah, something that comes from us, reflects who we are, and celebrates our understanding of God’s will in the world.

What is fascinating in all this is the stress on finding one’s own unique, personal contribution to religious life.Rabbi Shimon