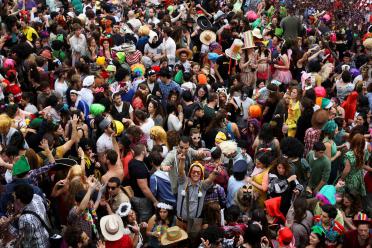 A few weeks ago, towards the end of Passover, I read a column in Ha’aretz by Rogel Alpher, my least favorite Israeli columnist (and that’s a hard title to defend!). Alpher ostensibly writes about television, but what he really does is criticize Israeli society from a misanthropic, arrogant, and usually ignorant perspective. The column under discussion is no exception.

Alpher complained about the Israeli inclination (custom might be the right word) to celebrate Jewish, national holidays is crowded public places. He was inordinately annoyed about the average Israeli, who seems to enjoy driving bumper to bumper in  interminable traffic jams, in order to get to a crowded beach or park, in order to stand, shoulder to shoulder, with people like him, barbecuing, sun tanning, or enjoying themselves in other vulgar, dirty, plebian ways. The fact that they seemed to like this form of leisure maddened him: he claimed that this is an example of fascist thinking, a proof of how shrunken and twisted the Israeli psyche is, how tribal and insect-like we all are. (I was expecting a reference to the “occupation” but he must have forgotten.)

Alpher’s ignorance is the first thing worth noticing here. Growing up in the ‘50s and ‘60s in Far Rockaway, a beach community in New York, I experienced first-hand, as well as hearing about it in news reports, the exact same behavior from Americans: beaches on Memorial day and Fourth of July weekends, as well as on hot Sundays all through the summer, were always packed with happy swimmers and sunbathers, and the parks were – and still are - full. And traffic jams? Forget about it! Alpher should know, but apparently doesn’t, that this is not necessarily the way of stunted, insect-like, fascist societies; it is the way of the world.

To be honest, I, like Alpher, don’t like crowds either. It is genetic. I visited the New York World’s Fair (1964-65) with my parents 11 times, on 11 rainy days; my father didn’t like crowds, or waiting in line, and neither do I. This Passover I managed, during chol ha’moed, to take some of my family around Jerusalem to some great sites, at all of which, we were completely or almost completely alone – a minor miracle during the holiday, but easy, if you know how. However, unlike Alpher, I don’t think that people who like, or don’t mind, large crowds, are incipient fascists, or lacking normal human sensitivities, or insect-like.

In this weeks portion, Be’chukotay, which closes the Book of Numbers, there are some blessings mentioned, which will be ours if we study and keep the Torah. These include the following (Numbers 26; 7,8): “And you shall pursue your enemies, and they shall fall before you by the sword. And 5 of you will pursue 100, and 100 of you will pursue 10,000…”.

Rashi points out that the math is off: If 5 will pursue 100, 100 should only be able to deal with 2,000, not 10,000! Rashi explains that “a small number of people keeping the Torah are not like a large number of people keeping the Torah”. In other words, there is some sort of added value, or power, or energy, a special quality, in a large number of people engaged in Jewish life and law, rather than in a smaller number – the added value increases exponentially, disproportionately, as more are engaged in Jewish life.

Now, Rashi could have focused on the military advantage of larger numbers: a force of 100 is not simply 20 times stronger than a force of 5, its strength grows disproportionately. But he chooses to focus, rather, on the source of our army’s strength: our fealty to and involvement in Jewish law. A large group of Jews living Jewish lives together adds a disproportionate amount of energy, confidence, and strength to the community, in comparison to a smaller group.

Although the vacationing Israelis Alpher dislikes so much were not all necessarily engaged in Torah while at the beach or the park – although I’ll bet some were – they were engaged in celebrating a Jewish holiday, together, in the Jewish State. And doing that together, in large numbers, especially for a community really and truly faced with enemies, is apparently, and noticeably, enjoyable, and empowering. I think this may well be why many people do like the crowded, perhaps in some ways uncomfortable, togetherness of the park on Israel’s or America’s Independence Day: they find it empowering, invigorating, and rewarding, in terms of the community and solidarity it fosters.

I don’t like crowded parks or beaches much either, but I do understand, and like, the strength we get from doing and believing things together, and wanting to be together when we do them.

This may be why people like the crowded, perhaps in some ways uncomfortable, togetherness of the park on Israel’s or America’s Independence DaysRabbi Shimon

Parashat Bechukotai is the 33rd weekly Torah portion in the annual Jewish cycle of Torah reading, and the last in the Book of Leviticus.  In it, God promises that if the Israelites follow God’s laws, He would bless them with rains in their season, abundant harvests, peace, victory over enemies, fertility, and God’s presence. But, if the Israelites do not observe God’s commandments, He will bring upon them misery, fever, stolen harvests, defeat by enemies,  pestilence, famine, and timidity. Those who survive will be removed to the land of their enemies, where they will become heartsick over their iniquity, confess their sin, and atone. God promises then to remember His covenants with Jacob, Isaac, Abraham, and not forsake us.