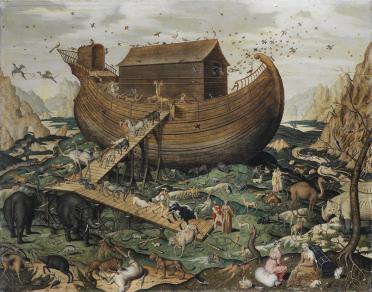 The news over these past couple of weeks has been so full of villains, charlatans, and fools, and the parsha of Noach, what with the flood and all, lends itself so well to a finger-wagging posture (one of my favorites), that it’s hard to know where to begin. I guess I’ll stick close to home, and focus on the latest cycle of disgraceful Haredi (ultra-Orthodox) actions and words concerning Israeli army service, as well as other issues impacting on Jews abroad as well: the status of non-Orthodox – indeed non-Haredi – Jews, the Kotel, conversions, and more. Here we go.

Noach is a problematic character. Right off the bat, when he is introduced to us, the Rabbis get involved with trying to decide if he was quite the religious figure Avraham, ten generations later, would be. It’s not hard to understand why: although Noach is good enough to be saved from the flood which destroys his entire sinful generation, he is unable to save any of them, and stands alone as a solitary figure. After the flood, perhaps depressed at the death and destruction all around him, he gets drunk, and is subsequently involved in a very unclear but clearly shameful encounter of a sexual nature with his son, Ham. Obviously, these last events place Noach in a very unflattering light, and are clearly a trigger for the more negative Rabbinic assessments of him.

One way in which Noach is seen as less than Avraham is in the verse in which we are introduced to him: “…Noach was a righteous man, pure in his generation, Noach walked with God.” This quite positive sounding description is juxtaposed by the Rabbis with a similar statement about Avraham, to Noach’s detriment. In Bereshit 17, verse 1, God asks Avraham to “...walk before me, and be pure”, and in chapter 24, verse 40, Avraham says about himself that he “walked before” God. Rashi, on our verse in Parshat Noach, explains the difference between Noach’s “with” and Avraham’s “before”: “Noach needed help, support, whereas Avraham went, and was empowered in his righteousness, on his own.”

Exactly what the difference may be between someone who is “empowered in his righteousness” on his own, as opposed to with God’s help, is not crystal clear. I would like to propose an idea which might be something I’m thinking of because of my growing irritation with the Haredi (ultra-Orthodox) position. One of the memes Haredi spokesmen like to use is how they are the true tradition, the way it always was, back to Moshe at Sinai, and everyone else is just compromising, backsliding, and mixed up. Their claim is that they are not changing, not innovating, not adjusting, they are simply following the dictates of Jewish law, tradition, and their Rabbis.

Obviously, this is false. Life is change, and Judaism has changed dramatically over the millennia, and continues to do so. Just a few obvious examples: a very large slice of the Haredi community is Hasidic. Surely these people know that Hasidism was a revolutionary 18th century movement, which was vehemently opposed by contemporary rabbinic leadership. Surely these people must also know that many of the givens of Haredi public policy – the childish refusal to sit next to or shake hands with women – was not the norm in most Orthodox circles as recently as 30 or 40 years ago. They must also know that the insistence that all Haredi males not work, and should rather just sit and (in many cases pretend to) learn Torah all day, was unheard of until this generation. Everyone understood that you had to earn a living. Many great halachic deciders, most notably Maimonides, forbade absolutely what is now the Haredi norm of living off of charity and public assistance in order to devote oneself to Torah study. This certainly was an impossibility before the advent of the modern welfare state, which Haredim use, in Israel and elsewhere, in order to get away with not working.

But let’s pretend that the Haredim are telling the truth, and that they are “just following orders.” What we see from the rabbinic comparison between Noach and Avraham is that Noach’s is a weaker, lesser, way to serve God. Avaraham is so great because he “walks before God”; Noach is lesser because he needs God’s support. This is illustrated clearly in many ways. When I was a kid, I always thought it was funny how detailed God’s instructions for building the ark are to Noach; I mean, really, couldn’t Noach have decided on his own how big to make the skylight? (I know there are mystical explanations for the ark’s dimensions, but let’s leave that aside.) Noach needs to be told what to do even when it comes to the simple things. Noachs’s silence is also strange – he has nothing to say to God about the impending destruction of the entire world!

Compare this to Avraham’s decision to argue with God about the destruction of Sodom and Gomorrah, or his decision, once he does arrive in the Land of Canaan, to leave it and go down to Egypt because of a famine. This was a decision he took on his own – and Rashi commends him for it. (Yes, I know, the Ramban thinks it was a sin, but, clearly, Avraham is acting independently here. Perhaps a dangerous thing to do, but the only honest and real path open to us.). Avraham is “tested”, again and again, by God, often told only vaguely what God wants of him – as opposed to Noach and that skylight. Avraham is all about making choices, making decisions, and growing, as a man of God, through that process. Avraham’s greatness, his “walking before God”, is precisely this: his understanding that being in a relationship with God is NOT about relinquishing one’s will, intellect, or agency. It is not about following; it is about leading. It is not about accepting; it is about challenging.

The Haredi mistake is in creating a false Jewish value of blind obedience – of pretending that Judaism is about simply following an (actually non-existent) monolithic Jewish way, without questions, innovations, or adjustments. (By the way, the “monolithic” lie is the only way this charade can work: if Judaism is multi-voiced (which it most definitely is), then you can’t pretend to just follow, you have to make choices, decisions.) Relinquishing one’s own will, one’s own ability, right, and, in fact, obligation, to question, probe, rethink, and adjust, is the precise opposite of the Jewish commitment to studying, and grappling with, God’s Torah. It is just about the most non-Jewish thing you can do. Which might be why we call non-Jews בני נח – children of Noach.

Being in a relationship with God is NOT about relinquishing one’s will, intellect, or agency. It is not about following; it is about leading. Rabbi Shimon

Parshat Noach is the 2nd weekly Torah portion in the annual Jewish cycle of Torah reading. In it, the world is destroyed by a flood, as a punishment from God for humanity's bad behavior. Noach and his family are saved, and begin the story of mankind all over again.  The parsha takes us through the rest of Noach's life after his leaving the ark, and lists the ten generations between Noach and Avraham, whose birth and early family history end the parsha.